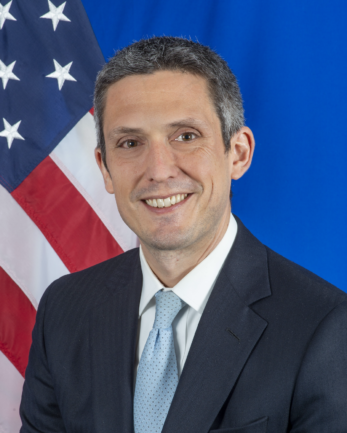 Mark Fleming began his tenure at the U.S. Embassy in Zagreb in May 2021 as Chargé d’Affaires, ad interim.

Mark joined the U.S. Department of State in 2002.  He most recently served as Deputy and then Acting Director for Pakistan in the Bureau of South and Central Asian Affairs.  Previously, Mark served as the Deputy Political Counselor at the U.S. Embassy in Islamabad, Pakistan, the Political and Economic Counselor in Zagreb, Croatia, and the Director for Balkan and Caucasus Affairs at the National Security Council in Washington.  Mark has further served at U.S. Embassies in Kosovo, Bosnia and Herzegovina, and Armenia, as well as with a Provincial Reconstruction Team in Ghazni, Afghanistan.

Mark hails from Richmond, Virginia.  He holds a bachelor’s degree from Georgetown University and a master’s degree from the National War College of the United States.