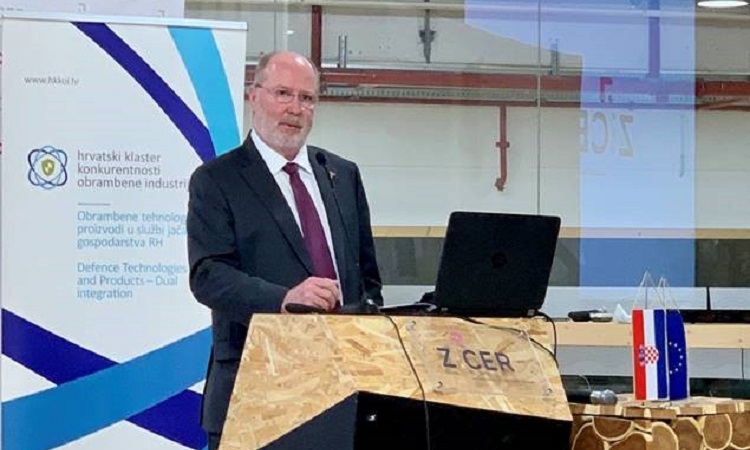 Wednesday, November 13, 9:00 a.m., at the Zagreb Innovation Center (ZICER)
(as prepared for delivery)

Thank you, Eric.  Dear Minister Krsticevic, Ambassador Simunovic, Croatian and U.S. company representatives, I am delighted to join you today to discuss how to further strengthen our bilateral relationship in the defense industry sector.

Croatia is an important and reliable NATO ally for the United States, essential for keeping peace and stability in the Southeastern Europe.  The U.S. government also highly appreciates Croatian forces joining ours in several missions around the globe.

Besides the dedication, Croatia brings its recent war experience to the table, which is a high-value-added in our partnership.  This does not only include Croatia’s senior defense officers, but also the defense industry that has been largely developed during the Croatia’s war for independence.

I have had a pleasure to visit a few of your innovative companies such as Dok-Ing, Shestan-Busch, Djuro-Djakovic, and HS-Produkt.  I also met with the representatives of many other highly-capable Croatian defense-related companies during the recent Adriatic Sea Defense and Aerospace trade show in Split.  Most of them export to the United States a substantial part of their production, as do dozens of excellent Croatian IT and hi-tech industry companies that I visited as the U.S. Ambassador to Croatia during the past two years.

There seems to be a lot of untapped potential for cooperation between the U.S. and Croatian companies, especially in the defense industry sector.  I have found the Croatian workforce, especially engineers and programmers, to be highly-skilled and innovative, and their wages very competitive.  There is also a substantial cultural similarity between our nations, as well as a strong pro-American sentiment in Croatia.  Many of the numerous U.S. investments here have been very successful.

The U.S. government has been a strong supporter of developing Croatian defense capabilities as a NATO partner.  Since the Croatia’s independence, we have provided Croatia with substantial know-how and numerous donations and will continue to do so.  We also work hard on a daily basis to bring here the best U.S. companies that can provide Croatia with the state-of-the-art and NATO-compatible equipment that Croatia needs to acquire by cost-effectively using its own resources.

I warmly welcome the ACEBA’s initiative for having nine leading U.S. companies visit Croatia today and tomorrow.  I am also grateful to the Ambassador Simonovic, Minister Krsticevic, and other Croatian government officials for their support in organizing this forum and other meeting and events that are part of this business mission.

I hope that the discussions at this forum will lead to productive partnerships that will involve as much as possible of Croatia’s own industry to fulfill the 2- percent-defense-spending commitment given to NATO.  As the U.S. Ambassador, I also look forward to seeing the U.S. companies included in this endeavor whenever feasible.  This will provide a strong basis for the continuous development of our bilateral relationship.